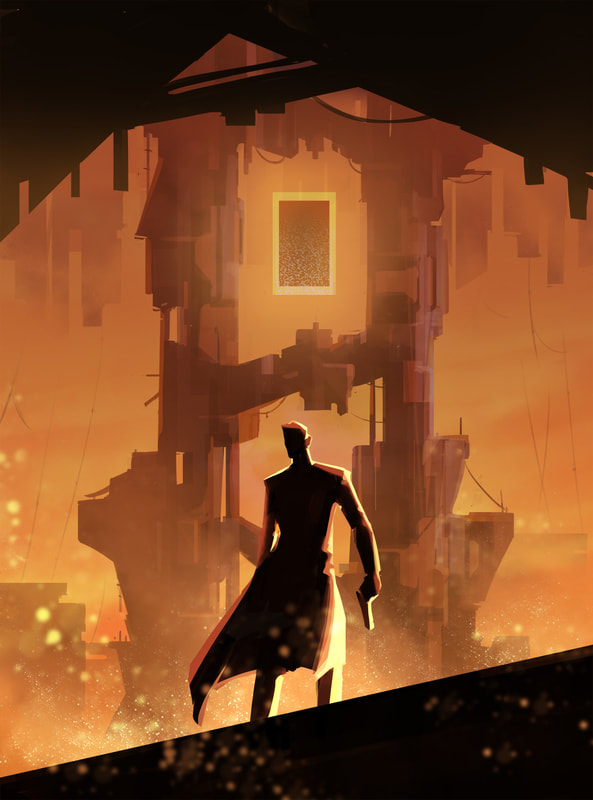 The war is over. But the spark of another war, has just been lit……

A war-torn world has finally come to a new age of peace. Those who profited and got their power from war has lost them by the post-war-reckonings and gone gently into good night.

As for the replicants, the fierce human weapon, has fell into disuse due to the end of the war. Though the replicants have humanity too, but the upcoming moral problems and the fear of normal people, has brought controversy to the issue about whether the replicants should fit into the society. As the struggle intensified, the replicant-hunting bounty hunters, armed militia, and mercenaries has risen. A new war is about to outbreak.

Human hold the advantage on number and intelligence. Meanwhile, the replicants possess superior physique and high-tech weapons. The resources had almost run out during the last war. As the new war begin, the world will fall into unrecoverable catastrophe.

The key to the future is held by four people:

The HUNTER with darkness took on the favorite gun of his best friend, who was killed by replicants, with his iron will, lethal combat skill, and sharp strategy, he stepped onto the path of vengeance that build upon blood and bones.

The REVOLUTIONIST with difference used his wisdom and charisma united the motley crowd to an unstoppable force, aimed for the breeding ground of all threats. Although he has caught 22 between the benefit of his own kind and humanity.

The invincible WARRIOR raised the storm of death, destroy everything that get in the way between his master and the noble goal. He seemed like striking a balance between his killing impulse and loyalty, but being unconscious about standing in the center of everything.

The talented SCIENTIST ascended to Heaven with his epochal invention, then fell into Hell after the post-war-reckoning. However, he found the opportunity in Hell, planned to rebuild his reign over fire and ashes.

And there’s one, not belongs to these four, just stepped into his own adventure.

Cold pale light beams seem penetrating the city from earth and pointing straightly into the heaven. The night in Shalom is always nothing but a period of time. As the heavy smog reflects the light, the hazy feeling is decorated upon this great city where the great powers of the world joined together for peace. Named by the meaning of “peace” from one of the most ancient language, as the leaders of wars ceased fire, this city turned from the most intensive battle area, into the herald of a whole new era of peace. Not only having the rich resources that exceeded other place, but also standing on the pivotal location, those are what made Shalom the most prosperous city in the world.

In a dark alley that can’t even be illuminated by the sleepless light of Shalom, a slight smoke rose into the air. The deadly shot that’d just been triggered seemed still echoing, with the warm blood that’d been freshly painted onto the wall. Dead bodies that seemed more than 10 laid over the ground, only two figures remained standing.

The light beam fell onto the figure on the corner, sketched the shape of face and shoulder. It also lit the color in the eyes, fiery red with high alert. Unlike the transparent eyes of the albino that showed the color of blood vessel, those eyes were fresh as the fire and fresh blood. They only belonged to the replicants, the most powerful human-weapon during the age of war.

“How surprising this far you can go, vulgar creature,” said the cold-blooded human-weapon, unexpectedly, the voice quivered slightly with fear.

“I’ve told you, that I’m created to hunt you down,” said the figure in the end of the alley, his dark hair and black coat had almost blended into the shadow. With a flip of a silver flash, the man in black put his heating pistol into the holster, move toward the replicant in the motion like the wraith.

The replicant reloaded the last clip with a skilled motion, the energy core on his SMG instantly lit up, and started to spin rapidly. The deadly bullet flow blasted out, ready to fire the man in black straightly into hell.

The pupils of the man in black contracted. The moment between life and death, seems to combine with the scenery 5 years ago……

His best friend who sacrificed for saving him.

And the last time, they fought for the bright future of peace.

As the momentum generated, Chris ran horizontally along the wall of 3 fast steps, and dragged a black stream behind him on the wall, along with the bullet holes chasing him. Chris then bounded out like a eagle diving toward its prey.

The replicant that just used up the bullet dodged this deadly aerial strike, using his genetically improved reflex, but suddenly a crimson red blew up on his face. Chris landed under the street light, with his right hand holding a knife shape object in reverse grip, which not reflecting a little bit of light. 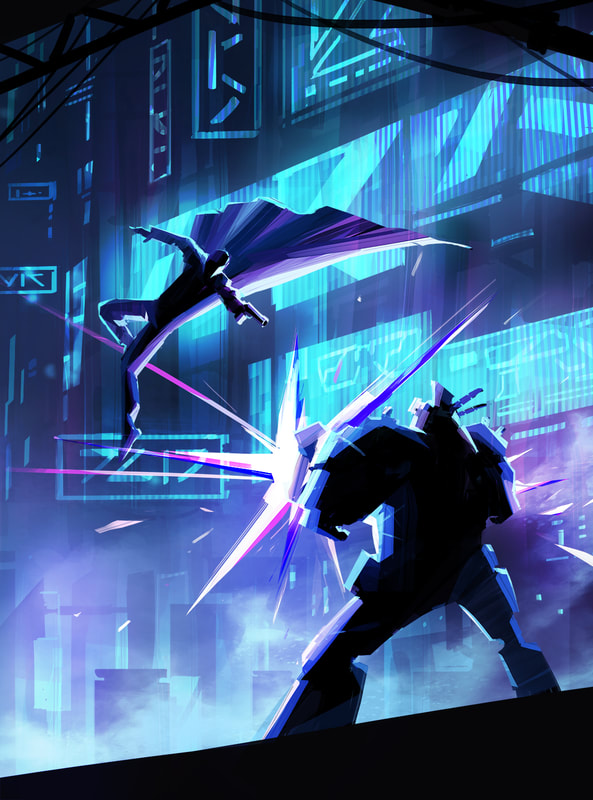 ​No time for rest, Chris immediately cut in, drove his shadow-like knife toward the replicant while turning it from reverse-grip. The replicant blocked Chris’ thrusting right arm with his left, his right hand shoot toward Chris’ heart with a silver flash. As for physical strength and speed, humans can never compare to replicants.

However, that human was already prepared.

Chris stepped out his left leg diagonally forward to the right side, turned his left side toward the opponent, dodged the lethal blow straight to his heart. Chris then grappled the replicant’s right wrist, which was holding knife, and swept his left leg. The replicant fell heavily with his face toward the ground.

To seize the flickering chance, Chris kicked his leg high then stroke the opponent’s defenseless spine with a downward axe-kick. The replicant wasn’t someone that could be easily dealt with. He did a half barrel roll to dodge this ferocious blow, kipped up simultaneously and kicked toward Chris’ face.

Unpredictably, Chris dived forward into the air, drove his knife down toward the replicant’s rising upper body. From chest to neck, a bloody path was cut out of the replicant’s body.

Hands pushing the ground, Chris rolled from his shoulder, to transfer the diving momentum forward, and stood up immediately, facing his opponent. A lethal strike to normal human, isn’t that critical to a replicant.

“You force me to,” said the throat-cut replicant with his broken voice, with blood dripping from his mouth.

Then he bit his left arm……

A slight smoke rose from the barrel of the pistol, which was shining with dark silver luster.

It’s an elegant dark silver weapon with streamline shape and comfortable wooden grip. There’s a double helix mark that represents the Replicant Legion on the grip. This pistol is the last thing that Gale-6007, the replicant martyr who dedicate his whole life for the peace between humans and replicants, left in the world.

What if this thing went berserking, I might be the one who fell in this dark alley, thought Chris. There’s some special chemicals in the spit of replicants, if blending with their blood, it will highly activat their sensory and physique, recovering quickly even if they’re lethally wounded. It can be called the invincible situation, and the ace in the hole of replicants.

Chris wasn’t even sure if he could escape.

“Yes, I am,” answered Chris. I am the fear, and the doom of all replicants.

You’re seeking for the wrong peace, Gale. Replicants can’t be trusted except you. Thought the hunter who’d just killed another prey, while staring at the pistol in his hand.

I will destroy everything that get in the way of true peace.

Chris, a.k.a. the Replicant Hunter, put the favorite weapon of his deceased best friend, now was named “Hunter-6007” by him, back into the holster, stepped into the hazy white light of Shalom.

It seemed like the stairway to heaven, but actually a highway, which goes straightly into the hell of hatred.

I will avenge you.